How You Can Take Advantage of the Cooler Summer Market

The cooler summer market is the adjustment that has been needed for over a year and a half. Change is not always welcome but this downshift in activity now is much better than the extreme frenzy we’ve been experiencing since COVID began.

Think of it like this, it’s better to fill a cavity early than wait too long and need a root canal. A slight adjustment now is better than a major market adjustment years down the line.  So, what caused the adjustment? When COVID hit, policy makers flooded the market with all different kinds of stimulus and the Federal Reserve started buying a historic number of mortgage-backed securities to drive mortgage interest rates down. In retrospect, they may have overcorrected which resulted in the inflation we are experiencing, so the gas had to stop being poured on the fire.  As Anthony explained in his recent market video, the FED not only stopped buying mortgage-backed securities earlier this year, they are now selling them as well.  That’s when we saw rates increase at a pace not seen since the eighties as a means to down shift inflation.  Had this not happened and inflation continued on the path it was on,  things would have continued to get more out of control. 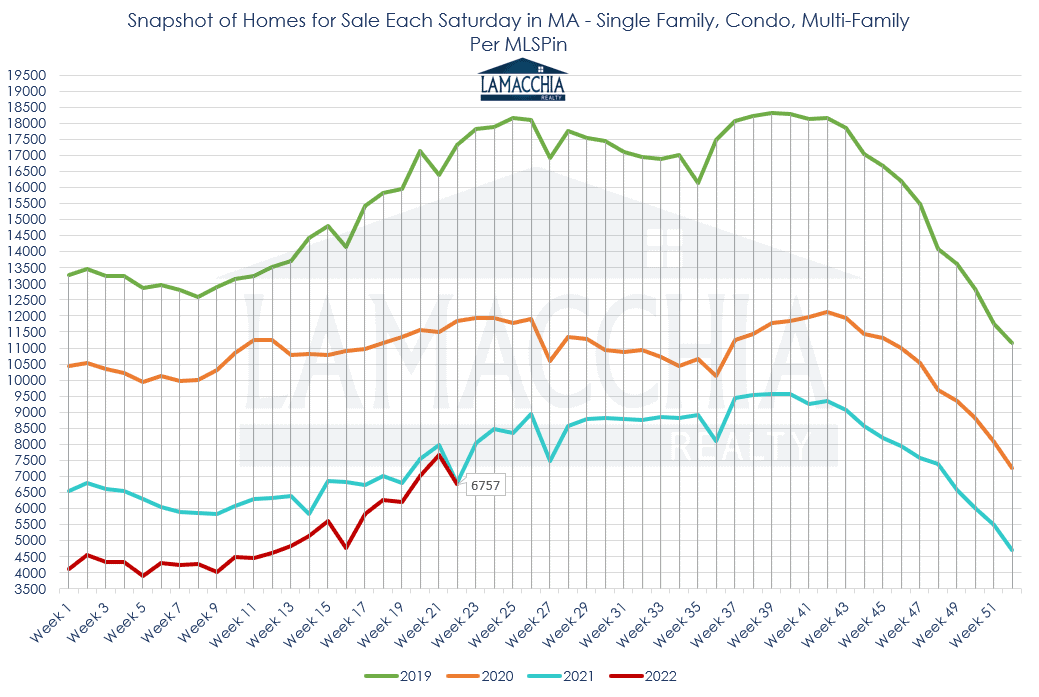 Despite all of it competition is still strong, and buyers are still out there, but with average prices increasing also at historic rates since 2020 and with the cost increase of borrowing, a shift in the market is happening.  For the first time in years inventory is at the same level as the year prior as depicted in the chart above, and single families are higher as depicted in the chart below. 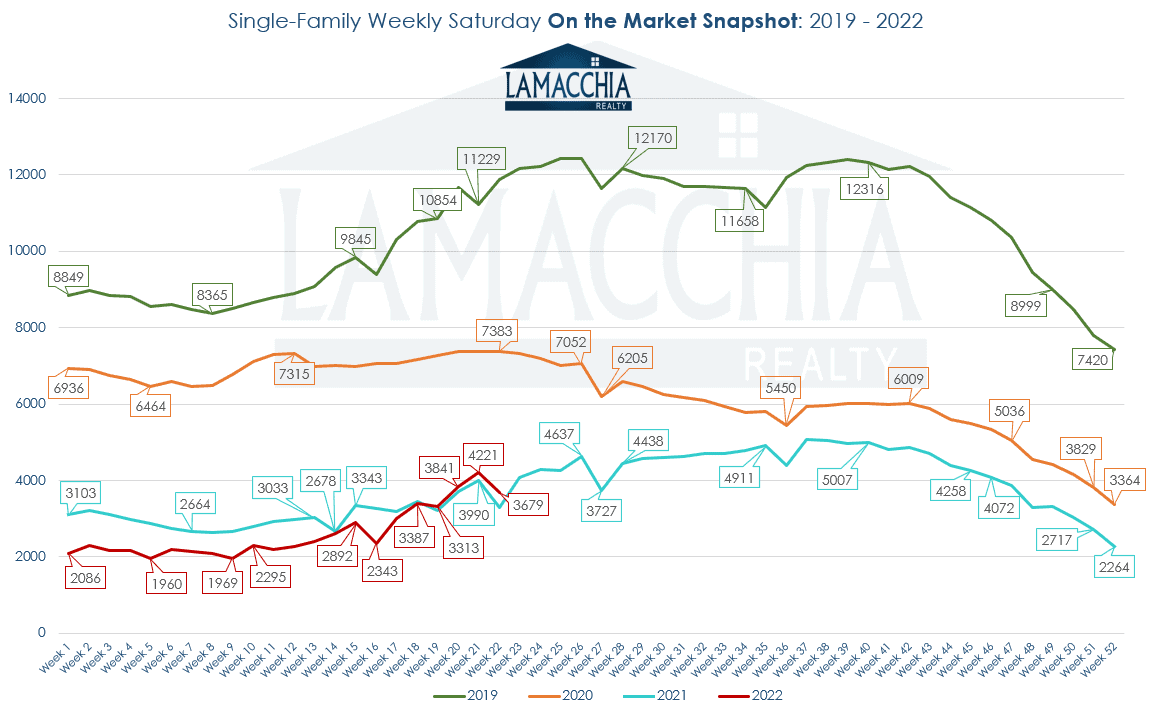 This will continue throughout the year and the number of homes will continue to increase and climb above 2021, 2020, and rise to about 2019, before-COVID levels.  It’s only natural to expect that home sales will continue to decrease as prices climb and rates linger in the 5% range, and eventually reach the 6% level by year’s end.  The informed consumer should not be misled into thinking that this means we’re going to endure a major housing correction or 2008-like scenario. That’s not going to happen. The book of mortgages that have been written in the last 10 years are the strongest book of mortgages in any single decade ever and the opposite was the case leading up to 2008.

Congratulations, frustrated home buyers! It has been a tough few years for those looking to purchase homes with competition higher than ever.  Most homes sold within a few days in multiple offer situations which buyers had little leverage or room for contingencies or even home inspections! 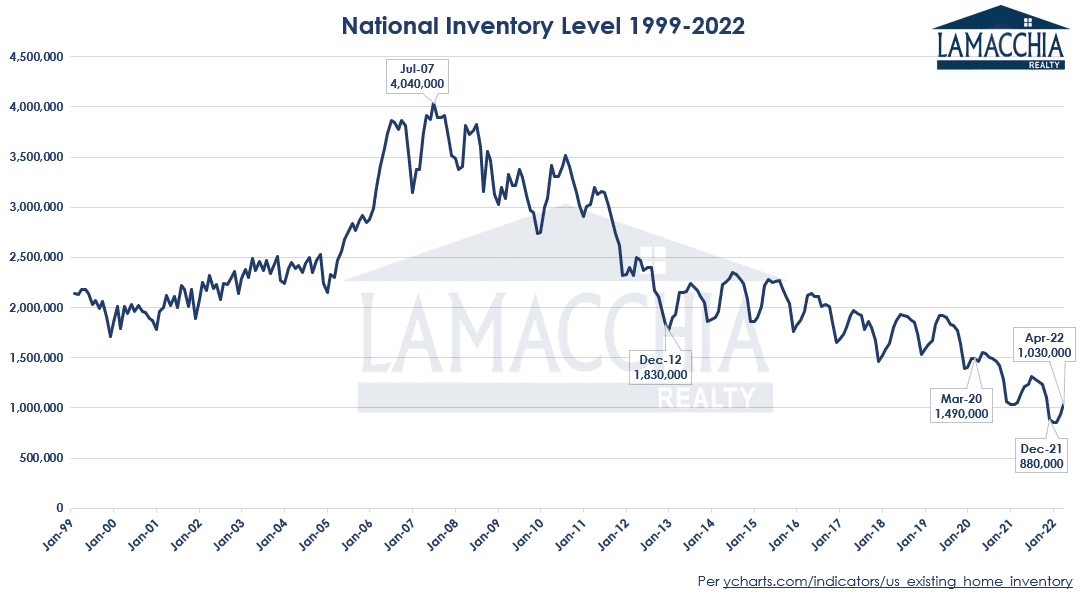 YES. Higher rates make home buying more costly, but it also pulls buyers out of the market.  Some buyers will decide (incorrectly) to wait until rates decrease or until prices decrease so they sign another lease or decide not to list their homes.  With fewer buyers comes fewer home sales over time, so then inventory will build back up which will provide another thing you’ve been missing: selection.  More homes to choose from with more leverage in your corner is exactly what a more balanced market will feel like. We aren’t at pre-COVID levels yet, but we are on the path. As you can see in the national inventory chart above, inventory is peaking upwards with the climb beginning in December 2021 and continuing thru to last month. This trend will continue its upwards path.

NO. Rates aren’t going down unless a significant unforeseen (tragic) national event occurs, and the FED feels they need to step back in like they did when COVID hit. You may see some variation like 5.8% down to 5.4% here and there, however a significant drop to 2021 levels isn’t going to happen, in fact, we believe it’ll continue to climb another point.  But you have choices. Buy now, lock in the current rate and if rates go over 6% later you win! If rates go down due to that unforeseen event, you refinance and still win, because you have the house and the new lower rate. Anthony filmed a video last week where he explained all of this, click here to watch.

Home sellers, the market has changed. This is not 2021 or 2020, or even early 2020, but it certainly isn’t 2008 either and there isn’t a crash on the horizon. Interest rates have indeed gone up dramatically since the beginning of the year which has had a major impact on what buyers can afford, because it obviously drives their payments higher. And because of that, we are seeing a difference in buyer demand on listings nationally but that doesn’t diminish the equity you’ve earned over the past three years. Equity increased an astounding 19% in 2021 when you factor in the national average, click here to see your home value.  That’s a great deal of extra money in your pocket.  So even with rates leveling out the multiple offers and the open houses with lines down the street, selling now is still extremely lucrative.

Interest rates can’t go from 2.8 or 3% to 5.5% and expect there not to be some impact. What we’re experiencing here is the market shifting down a gear. And frankly, it’s likely to shift down another one or two like it normally does in the summer, but this year it’s going to be compounded with interest rates going up so much during the spring months.

Sellers have enjoyed the upper hand for years now. Prices have gone up 20 or 30% since the beginning of COVID and have set the expectation that whatever a neighbor sells for, a seller should be able to beat or at least match that.

It’s often that a seller of late thinks, ‘my neighbor sold for over asking and got $850,000 so I need to get $850,000. But current sellers must remember that sales that have recently closed were negotiated back in the winter when rates were lower, and inventory was lower as well.  Homes that went under contract back in January and February when there were only 4 other single families on the market in that area would naturally sell for a higher value as demand was higher.  Now sellers need to be realistic and not overprice their homes which can cause a home to linger on the market.  This isn’t a call to underprice your home but to price it well with your REALTORS® advice to attract the most buyers possible and create competition. The silver lining for sellers who are also buying is that they’ll have more leverage as a buyer in this market now too, as it’s all relative.  Anthony filmed a video last week where he explains this, click here to watch.

The main take away for consumers to remember is there is a cost of waiting.  Home prices are still rising, and mortgage rates are predicted to continue their ascent into the 6’s by the end of the year. Despite the fact that change can cause buyers and sellers to have cold feet, locking down a rate and having an offer accepted today will be less costly for buyers than if they wait until later, and sellers should take advantage of the still very low inventory and high buyer demand.  The shift the real estate market so far only points towards more of a balance for buyers and sellers, so those considering a move should get prepared to make one by working with an expert REALTOR® who knows how to develop a unique plan to get it done.